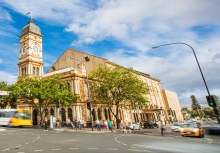 On 11 April 2018, I received an email from a trader operating within the Parade Precinct expressing her concern regarding George Street, Norwood.

The trader appeared very distressed that the Council had declared that George Street was to be closed permanently and asked that ‘this decision be reversed by the Council.’

I responded to the trader via email, advising that the Council was not permanently closing George Street and requested that she please advise me how she came to form this view.

The trader responded by sending me a photograph which she had taken of a leaflet titled ‘Information for Traders on George Street Closure’, which had been delivered to her shop.

Amongst a series of unsubstantiated claims and unsourced statistics, the leaflet states that traders who signed the petition which was recently presented to, and considered by, the Council in opposition to the George Street Piazza event:

‘remain concerned the Piazza event is merely a Trojan horse for the permanent closure of George Street in the not too distant future, as reflected in a recent quote from Mayor Bria to the Eastern Courier:

“… the permanent closure of George Street was something that the Council would consider later this year”.’

The leaflet also directs traders to a website titled www.keepgeorgestreetopen.com, urging them to register their email details to be kept up-to-date.

Remembering that the journalist who wrote the article, Mr James Gratton, regularly tapes our conversations (with my knowledge) when discussing Council related matters, I telephoned Mr Gratton to ask if he still had a recording of the conversation which informed the article which was published in the Eastern Courier Messenger on 14 February 2018.

Mr Gratton advised me that given the conversation occurred nearly two months before, he may have deleted it due to capacity issues.

He then followed up with a text message to confirm that he did, in fact delete that particular discussion:

‘Hi Robert, sorry I don’t seem to have that particular recording. I usually have to delete the recordings after a couple of months due to space.’

I then telephoned Mr Gratton again to discuss this matter further.  It was during this conversation that he confirmed with me that at no stage did I say to him that a decision would be made by the end of the year regarding the permanent closure of George Street, Norwood.

Rather, he said the section of the article in question, was written following a discussion he had with his editor regarding our conversation about different options to increase the public realm as part of The Parade Masterplan Project; a direct response to the comments which the Council received from residents, business owners, traders and visitors during the first round of public consultation, which are reflected in Attachment B5 and B16 of the report.

Mr Gratton advised that for the sake of brevity and simplicity, it was decided to write the article as it was presented, although he admitted this particular section could have been worded better.

I then asked Mr Gratton if he could confirm this for me in writing, which he did via a text message which reads:

‘Hi Robert, just regarding the article on 14 Feb.  The line in the article regarding the closure of George Street was referring to it as an option, not what was actually happening. In that instance we paraphrased your quote’.

I have therefore been misrepresented in this leaflet as the statement was not a quote from me, as suggested, because it did not repeat my exact words to the journalist.

Rather, the statement in the article paraphrased our discussion which has, in my view, been deliberately and mischievously presented in such a way to give the impression that it was a quote from me.

In response to the leaflet, on 12 April 2018, a statement was uploaded onto the Council website clarifying the Council’s position in regards to the George Street Piazza and, amongst other things, rejecting the statement which appeared in the Eastern Courier Messenger as being direct quote from me.

A truncated version of the Council’s statement was subsequently sent to all Members of the Norwood Parade Precinct Committee and then approximately 300 traders located within The Parade Precinct that the Council has on its database.

Of particular note is that the leaflet did not provide any information as to who was responsible for the content or who printed it.

Nevertheless, Council’s staff have, through legal means, been able to identify the organisation responsible for the ‘keepgeorgestreetopen’ website and material that was published and circulated amongst traders within The Parade Precinct.

As we all know, the options for the treatment of the intersection of George Street and The Parade as part of the draft Parade Masterplan contained in the staff report to be considered tonight, does not include options to either partially close or fully close George Street on a permanent basis.

Rather, the two options for George Street are maintaining the status quo or widening the footpaths by removing the car parks on the eastern and western side of George Street between The Parade and Webbe Street.

In both options, the existing two-way traffic remains unchanged.

In conclusion, I am disappointed that an anonymous leaflet has been circulated in the public arena and a website has been developed, which falsely suggests George Street will be permanently closed or at the very least, gives the impression that the Council is proceeding with proposals which have no basis, and that I have personally committed the Council to consider such a closure.

The misrepresentation of my position regarding George Street contained in this dishonest leaflet created unnecessary confusion, distress and anger amongst a number of traders and property owners on The Parade, many of whom have either emailed me, personally spoken to the Chief Executive Officer or contacted the Council’s Economic Development staff to express their strong objection to the material contained therein, as they believe this behaviour is needlessly  damaging The Parade brand and this damage is something which should be avoided at all costs given the fierce competition the precinct is facing from other main streets and large shopping centres in the metropolitan area.

I look forward to working with all stakeholders who want to partner with the Council to see The Parade thrive as a Main Street, but I will not hesitate to call out those who either intentionally or unintentionally misrepresent me or the Council as The Parade Masterplan proceeds.