The City of Norwood Payneham & St Peters has developed a Masterplan for The Parade, Norwood which will guide the redevelopment of this significant mainstreet precinct. 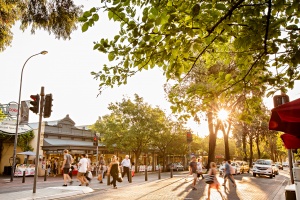 At a Special Meeting held on 15 May 2019, the Council endorsed The Parade Masterplan, which forms the long term strategic framework for the planning, redevelopment and activation of this important main street. The Masterplan has been developed to complement the numerous strategic initiatives that have been progressed and implemented by the Council over the last few years, including the introduction of the planning  policy framework that supports significant residential, mixed use and employment growth opportunities in and around Kent Town and Norwood, and in particular around The Parade.

More specifically the Masterplan focusses on protecting the identity and appeal of ‘The Parade’, and how this significant economic, social and cultural asset can contribute to the experience of those people who choose to live, work and play on The Parade. Most importantly, The Parade Masterplan establishes a holistic vision to direct the progressive enhancement of the streetscape to support local businesses, encourage new investment and maximise community enjoyment and appeal.

Some of the tangible changes that are incorporated in the Masterplan include the prioritisation of pedestrian  access and movement and the creation of safer environment for all users through the introduction of a pedestrian scramble crossing at the intersection of The Parade and George Street, wider footpaths along the full length of The Parade and on George Street and the introduction of continuous footpaths along the intersections of The Parade and side streets.   In addition  the Masterplan proposes additional street trees and landscaping and new street furniture, to make The Parade a more pleasant place for the community to enjoy.

It is anticipated that the George Street scramble crossing and landscaping within the central median between Fullarton Road and Osmond Terrace will form the first two stages of the implementation of The Parade Masterplan.

The Parade Masterplan (part one)

Please note: due to the large file size The Parade Masterplan has been split into two documents.

In January 2016, the Council commenced the development of a Masterplan for The Parade, in recognition of its economic, social and cultural importance.

The intent of the Masterplan is to provide a strategic design framework for the future redevelopment and activation of this important mainstreet.

The development of the Masterplan is important because the last major upgrade to The Parade occurred approximately 25 years ago.

In order to maintain The Parade’s vibrancy and popularity as a destination for shopping as well as social and cultural experiences, it has been recognised that the public realm needs to be upgraded. This, together with the possibility of higher density residential and mixed use developments occurring in and around the Norwood area, has highlighted the need to refresh and revitalise The Parade and review the qualities that give The Parade its ‘sense of place’.

The information and comments on the draft concepts that the Council received as part of the Phase 1, Phase 2 and Phase 3 community consultation and engagement on The Parade Masterplan were collated and used to inform the preparation of the final Masterplan.

The Council commenced the first phase of community engagement on The Parade Masterplan on 21 January 2016 at the Tour Down Under Street Party Event, with the formal consultation period closing on 19 February 2016.

During this period, the Council ran community events, held targeted stakeholder consultation, ran sessions with school students, and developed a dedicated project website: Planning The Parade: Have Your Say!

Overall, there were over 800 visits to the Council’s project website and 275 written submissions were received on The Parade Masterplan project.

For a summary of the consultation comments, download: Phase 1 Summary Report

A number of design concepts were developed in response to the ideas and comments which were provided as part of Phase 1 of the Project in early 2016.

Consultation on Phase 2 of the Masterplan closed on 22 June 2018, with 146 submissions received from the community about the proposed Concepts.

Questions were asked such as:


All comments which were received on the draft design concepts for The Parade during Phase 2 were reviewed and used to inform the development of the draft Masterplan for The Parade as discussed in Phase 3 below.

For a summary of the consultation comments, download: Phase 2 Summary Report

Phase 3 of consultation on The Parade Masterplan closed on 17 August 2018, with 159 submissions received from the community on the draft Masterplan and 593 individual visits to the Phase 3 consultation webpage.

The comments received during Phase 3 of the Project were used to inform the finalisation of The Parade Masterplan, which was considered by the Council at its Special Council Meeting held on 12 September 2018.

At this Meeting, following consideration of the comments received, the Council resolved to defer the decision on the final Masterplan subject to the preparation of a report from the Council’s traffic consultant on the traffic matters contained in The Parade Masterplan.

The traffic report was presented to the Council, together with the final draft Masterplan, at its special Council Meeting on 15 May 2019.

A copy of the Minutes of the Special Council Meetings (12 September 2018 and 15 May 2019) can be downloaded from the Agenda & Minutes page.

The Parade Masterplan will now be used to prepare detailed designs and to enable budgeting to be discussed and funding to be secured.

Implementation of The Parade Masterplan will be a major commitment for the Council and for this reason will most likely be undertaken through a number of stages over the coming years.

For several months now, there have been a number of claims made publicly by an anonymous party that the Council is proposing to permanently close George Street. These claims are incorrect, at no stage has the Council formally considered or approved the partial or complete closure of George Street on a permanent basis.

As part of The Parade Masterplan, the Council looked at opportunities to improve the function, safety and amenity of George Street and to this end, two options for George Street were developed, both of which retain George Street as a two-way street.

Option 1, maintained the status quo by retaining George Street in its current configuration, with minor modifications mainly at the intersection to improve pedestrian and vehicular safety.

Option 2, involved widening the footpaths but retained George Street as a two-way street. The widening of the footpaths will be facilitated through the removal of the on-street car parking spaces on the eastern and western side of George Street, between The Parade and Webbe Street. Additional tree planting and landscaping would also form part of these proposed works.

Neither option proposed the permanent closure of George Street. A copy of the Concept Options for George Street was available through the Phase 2 consultation page.

Through the Phase 2 consultation period, over half of the respondents (53.7%) were in favour of Option 2 for George Street. This feedback has been considered through the preparation of The Parade Masterplan draft. The Parade Masterplan endorsed by the Council is based on Option 2 and retains George Street as a two way street. It also includes improvement to the operation of George Street through the introduction of a pedestrian scramble crossing at the intersection of The Parade and the formalisation of the traffic movements.

The delay in the progress of The Parade Masterplan was a result of the former State Government’s decision in early 2016 to commission a $4 million study into the electrification of public transport in Adelaide, which includes investigations into the proposed EastLINK tram extension.

The progress of the Masterplan, including the second phase of consultation, was delayed to enable the preliminary results of the State Government’s investigation to be completed. The intent was that the Council would use the results of the investigations to inform The Parade Masterplan. However, the newly elected State Government indicated that a tram along The Parade was no longer an aspirational target.

As a result, the Masterplan does not include options for the integration of the tram line within the existing or future streetscape.

For more information regarding AdeLINK, visit: Electrification of public transport in Adelaide, including AdeLINK - DPTI