The City of Norwood Payneham & St Peters has recently completed a bicycle boulevard along Beulah Road, Norwood, which is a popular route for cycling to and from the Adelaide CBD.

Construction of the Beulah Road Bicycle Boulevard was completed on 9 October 2020.

Approximately 200 plants and 35 trees were introduced at the entry statements, on roundabout islands and throughout the platform garden beds.

The project also included Water Sensitive Urban Design (WSUD) along the full length of the boulevard to provide a greener experience and improved tree canopy coverage once the plants and trees are fully established. 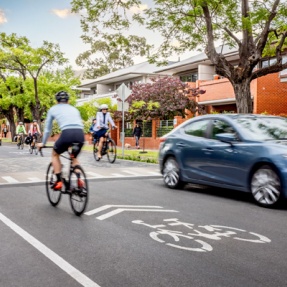 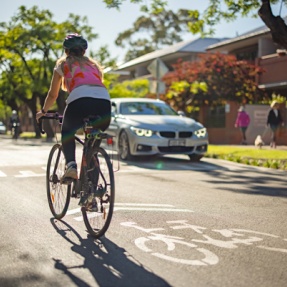 Beulah Road has been identified within the Council's City-wide Cycling Plan as an appropriate location to form a bicycle boulevard, to offer a convenient alternative to cycling on main arterial roads, such as The Parade and Magill Road, as well as creating a more inviting place to walk and a more attractive place to live.

The Council has considered various design options for the proposed bicycle boulevard and has selected a preferred option, which includes the implementation of various safety and amenity improvements along Beulah Road, between Fullarton Road and Portrush Road.

The preferred option allows for local vehicle access to remain unchanged and on-street parking to be largely retained.

A community information session was held on Thursday 17 March 2016 to discuss aspects of the Concept Plan and receive feedback. For more information, visit: Community Consultation

Bicycle boulevards are designed to:

To achieve a safe environment on Beulah Road and to encourage cyclist numbers to increase further, the Concept Plan proposes a number of safety and amenity improvements.

Design options considered by the Council

For an overview of the design options considered and traffic considerations for the Beulah Road Bicycle Boulevard, download: Design Options and Traffic Impact Report