Our City contains many excellent intact examples of residential and commercial built heritage from the Victorian era and beyond.

However, as the City evolves and more contemporary developments feature on our urban landscape, it is important to ensure that each complements, and is complemented by, its surroundings.

Architects at Grieve Gillett Anderson worked closely with the Council to design this College Park home which they say, “Despite it’s historical context, this dwelling gives way to an edgy modernist building that responds to contemporary ease and practicality of busy family life”.

The development has been touted as a sensational design by David Brown, the Council’s Heritage Advisor, who also recognises its value in the streetscape. 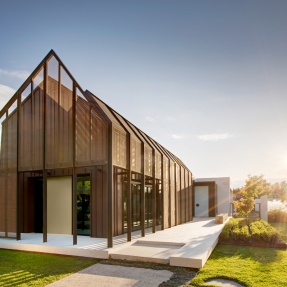 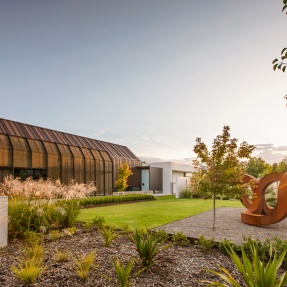 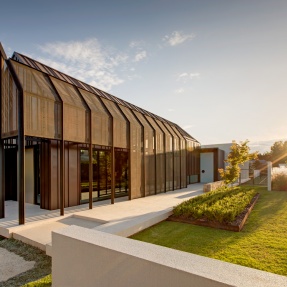 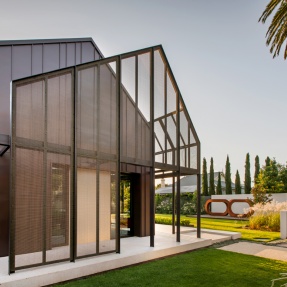 How well does the development complement and reflect the character of the street?

Though potentially somewhat confronting to the first time observer, this contextual contemporary dwelling takes inspiration from surrounding buildings, specifically the church across the road and the other traditional homes.

Every building in a Historic Conservation Zone has a role to play in telling the history of the area. This block of land had various uses since the original house was demolished and the new house continues the story of the site with a bold architectural statement.

Typically, conservative new houses in Historic Conservation Zones are recessive, simple designs with hipped or pitched roofs, and some masonry elements. In this case the scale of the house, the desire of the owner and the talent of the architect have combined to produce an inspirational piece of modern residential design.

What are the standout features?

Being a double block, the scale of the property is impressive, with so much space given over to landscaping.

The folded and angled roof and verandah screen are the main eye catching elements, however there are subtle design features that on closer inspection are very well considered.

The floating concrete floor that forms the front verandah is beautifully designed and constructed, and the lack of visible garaging from the street is a significant positive element.

The restrained high quality material selection is impressive, along with the simplicity in the complexity of the design shown through the repetition of elements and rhythm in the verandah screen.

Some people may consider that the development is too outlandish or is too different to traditional homes in the street.  What would you say to that suggestion?

I think the bold design has a place in Baliol Street. Clearly it would not be possible to have a street full of new houses here, so this somewhat radical approach works as it is a single occurrence and cannot be repeated on other sites.

The development certainly differs to traditional homes in the street so I can understand that not everyone will warm to it. To a certain degree it comes down to a matter of opinion as to whether people think the house suits the area. Many would say a traditional stone villa or cottage would be better, however that would blur the visual history by confusing it with the actual history of the site.

Ultimately, the house was commissioned by the owners and is a product of a rigorous design and approval process. It satisfies the principles of the Development Plan and I think is an excellent example of how modern architecturally designed buildings can relate to their heritage context without resorting to mimicry or borrowing the material palate from the surrounding structures.

Are any aspects of the development transferable to a more economical build?

The bespoke nature and high quality material selection drive up the cost of projects such as this.

Challenging the standard house design need not be expensive, but often turns out that way, however a good quality stone façade is not particularly economical either.

Potentially adopting a more contemporary style and spending money on good design can make way for a house that stands out without breaking the budget.

The lessons in this house are that the elegance and restraint of the design shine through, but also enhance the quality of the materials. Get the design right, and then find more economical materials to finish the project off well.

What trends have you noticed in relation to new homes proposed in Historic Conservation Zones?

As Heritage Advisor to the Council I have seen approximately 100 new residential developments approved over the last ten years, the vast majority of which were not designed by registered architects.

Designers and builders of these dwellings tend to head down a path of least resistance, loosely coined as classic contemporary style and typified by:

While these designs are sometimes elegant and well executed, they are now all too common. In some contexts this is not negative as they provide an easier understanding of the development history of the area, and can be good simple infill buildings that do not detract from the significant heritage buildings close by.

They are also a much better design outcome than replica copies of old houses, which tend to blur the visual history of an area. The desire for these is declining in our Historic Conservation Zone.

In rare cases, like this house in Baliol Street, the owners have chosen a talented architect to challenge the norm. In the ten years I can only two other contemporary architecturally designed new houses that have pushed the boundaries to this extent in a Historic Conservation Zone.

How does the final design differ from what was originally lodged with the Council?

The initial proposed design lodged with the Council was for an elegant modern flat roofed house with a feature bluestone wall. The floor plan essentially remains the same as the built house, while the rear section of the house changed a little. The front section of the house is where the largest modifications to the early design are concentrated.

How did you and the Council’s planning staff influence the final design?

The early flat roofed design was considered inappropriate in this sensitive location, mainly due to its lack of visible roof form. The earlier design also lacked a verandah element—another design feature which the Development Plan requires.

Traditional historic residential design in Adelaide featured hipped, gabled or skillion roofs right up until the late Interwar period when Art Deco and Modernism had an influence on design in the late 30s. This saw the appearance of the first flat roofed houses, though they were still quite rare until the 1950s.

The architect’s response for the need to add a roof was to avoid the common response of “adding a hat” on to the front of the house.  The need for a visible roof form was challenged and to a certain degree deconstructed to the extent that the folded and angled building form we see now was produced.  The verandah element also challenged the traditional notion of what a verandah is, and became a feature frame and screen in front of the house.

So, in summary the changes were only to the front portion fo the house, but they were significant in terms of their visual impact on the house, its contribution to the streetscape and its compliance with the Development Plan principles.

Arrange a meeting with the Council’s Heritage Advisor