Citizen of the Year Awards

The Citizen of the Year Awards celebrate the achievements and contributions made by outstanding members of our community.

en of the Year Awards are presented by the City of Norwood Payneham & St Peters in conjunction with the Australia Day Council of SA.

The Awards reward and recognise individuals and organisations that have made a noteworthy contribution during the current year, and/or given an outstanding service over a number of years, to a local community over and above normal employment duties.

Outstanding contribution and community service includes areas such as education, health, fundraising, charitable and voluntary services, business, sport, arts, the environment, or any other area that contributes to the advancement and well-being of a community.

The Awards will be presented at the City of Norwood Payneham & St Peters Australia Day Celebrations on January 26.

Citizen of the Year

To be eligible, the person must be an Australian Citizen.

Young Citizen of the Year

To be eligible, the person must be an Australian Citizen aged over 16 years and under 30 years of age on 26 January 2019.

Community Event of the Year

This is presented to the person/group who has staged the most outstanding community event during the past year.

A person or group delivering outstanding work or for an event or cause, staged in the community during the past year.

For selection and eligibility criteria and to nominate, visit: Citizen of the Year Awards or click on the button below.

Congratulations to 2021 Citizen of the Year 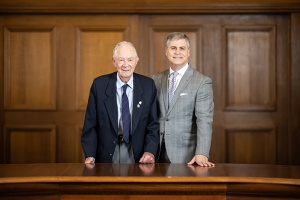 Ever since he was a young man, Donald (Don) Looker, of Royston Park, has provided exceptional and dedicated service to his community and his country.

He was posted to the United Kingdom and flew 38 operations with No. 115 Squadron.  For his contribution to “restoration of freedom from enemy occupation”, Don was awarded the Legion of Honour by the French Government.

In his civilian life, Don trained as an electrical fitter and served in various positions in the trade, including senior supervisory and training roles, until he retired in 1980.

For the past 45 years, Don has been an integral and much loved member of the RSL. For 34 years he has provided his tireless service to Neighbourhood Watch. He has also been a Justice of the Peace since 1982.

He is absolutely and unquestionably worthy of the Citizen of the Year Award.