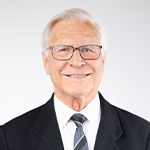 I was born, raised, educated and employed in the Port Adelaide District, so naturally I am a supporter of the Magpies and the Power. I also played soccer, and am a Life Member of the Port Adelaide Soccer Club (now “The Pirates”).

I am retired from full time employment after working in Local Government engineering for 40 years. A qualified Survey Draftsman, I also have an Associate Diploma in Surveying from the University of South Australia, and was previously an associate member of the Institute of Municipal Engineering Australia, and a member of the Australian Institute of Traffic Planning and Management.

I have lived in Marden for 47 years, and was elected as a Councillor for Torrens Ward in 2006, re-elected in 2010, and again in 2014. Although I was originally a reluctant candidate, I have found life as an Elected Member to be challenging and interesting.

I am currently on the Marden Senior College Governing Council, the Eastern Health Authority Board, and the Council’s Traffic Management and Safety Committee. I am also involved with local community groups such as Neighbourhood Watch and Sustainable Communities SA.

I am  married to Peggy with two adult children – daughter Monique with granddaughters Grace, Hannah and Maggie – and our son, Jonathan.

I enjoy travelling, music, following sport, and most importantly, spending time with my family.